‘All human beings are spiritual:’ Elaine Tola, chaplain at WCBR 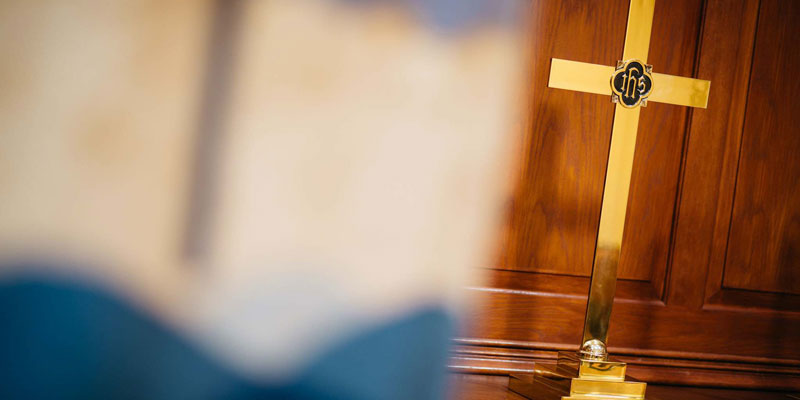 For Elaine Tola, one of the best things about being the chaplain at Westminster-Canterbury of the Blue Ridge is just listening to the residents.

“That’s got to be one of my favorite parts of the job,” she says. “Boy, they’ve got some stories to tell.”

She was listening to a 102-year-old resident recently, and marveled that the lady had now experienced two major pandemics in her life. The resident thought and said, “I don’t remember the first one.” But she remembers her mother telling about watching out the window as wagons went by carrying Spanish Flu victims. “And she would hold me tight” as they passed.

‘Where do they get that spiritual strength from?’

Stories like that. And like those told by veterans of the Second World War and Korea. And so very many other kinds of stories, from a fascinating variety of lifetimes. And Elaine Tola feels “privileged” to hear them.

“People come here with their lived experience,” and she tries to learn from it. She asks herself, “Where do they get that spiritual strength from, and how can we build on that?”

Elaine is a board-certified chaplain with the Association of Professional Chaplains. She’s also an Episcopal deacon, but her work is ecumenical. She ministers to people from all faith traditions, as well as to those with no such background at all.

“All human beings are spiritual,” and it’s her job to connect with that, and help residents benefit from it. They may get their spiritual uplift from formal religious services, or from engaging in art or nature, or walking. But the spiritual aspect is there. “That’s what sets us apart from other creatures.”

From Vespers to the blowing of the shofar

Chaplain Tola sees that there is a weekly Vespers service at 4 p.m. on Sundays – sometimes conducted by her, sometimes by others. It’s virtual now, because of the coronavirus. Those services appeal across Christian traditions, but she knows that doesn’t include everyone.

“We also have a rather large Jewish population here.” So for the High Holy Days in September, she invited a rabbi to come in and blow the shofar. He also stayed to answer questions. That was beneficial to “a lot of people who were not necessarily Jewish, but were very interested and found it very moving.”

In addition to the rabbi, of course, she works with pastors from a variety of faith communities around Charlottesville, to make sure residents have access to their own beliefs and traditions. For instance, for Catholics, sometimes a priest is seen as essential.

She had to ‘retool’ all her plans

But for her, nothing is better than the listening, and the talking. “It’s important for human beings to know they are seen and heard,” she says. And especially for those under medical care – they need people to “see them as the whole people that they are, not just someone with a disease.”

Olin Herndon, a retired Methodist minister who lives at WCBR, says Elaine is doing a good job. And it hasn’t been easy, coming here when she did.

She accepted the job in February, she says, “The world looked completely different.” She had a lot of plans, but by the time she started, she had to “retool” them all. For instance, she recently put together a different kind of annual remembrance service. It’s a tradition at WCBR, and usually involves an in-person gathering of family and friends of those who have died during the year. It was important to Elaine, as someone who had worked for five years in hospice before coming here, to get that right, despite COVID.

So it was all done virtually – with spouses and friends doing readings that mattered to the departed, and musicians from WCBR performing accompaniment. Electric candles were lit around a fountain in a courtyard. You can stream the service online: https://vimeo.com/478515109/6a3a847d3e

Olin Herndon offered his professional opinion of the service: “That was nicely done.”