Big History is bigger than you can imagine, but Jim Kingsbury can explain it 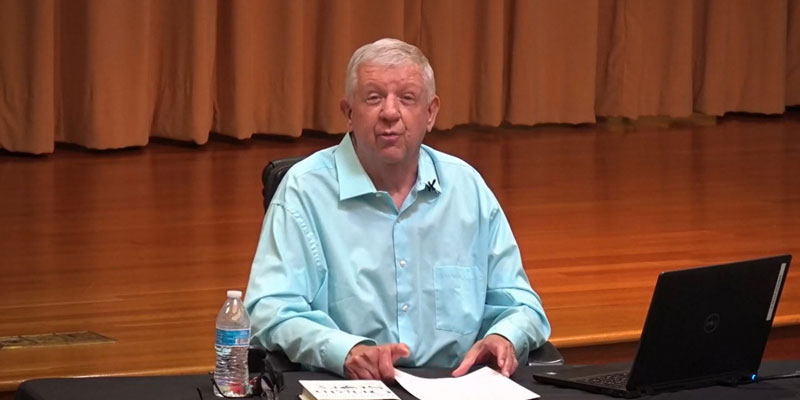 A recent series of Westminster Institute of Lifelong Learning lectures by WCBR resident Jim Kingsbury is reminiscent of what Douglas Adams, author of The Hitchhiker’s Guide to the Galaxy, wrote about space:

“Space is big. You just won’t believe how vastly, hugely, mind-bogglingly big it is. I mean, you may think it’s a long way down the road to the chemist’s, but that’s just peanuts to space.”

Kingsbury’s topic is just as big. In fact, bigger – because space in all its mind-boggling bigness forms only a part of his topic, “A Big History of Everything.” It was so big that Jim broke it up into three sessions. You can still watch them on video via the Web. See the links below.

The idea came from a book by David Christian

He got the idea from a book he’d read, Origin Story: A Big History of Everything, by David Christian. Christian is a specialist in Russian history, but that was too small for him. He branched out into the field he calls Big History, which covers the past 13.7 billion years – from the Big Bang to the present day.

When the universe first formed out of an unimaginably small speck, energy and matter separated. The matter mostly consisted of the two lightest gases, hydrogen and helium. But light as they are, get enough of them and gravity pulls clouds closer together, and they eventually form heavier elements.

That’s when things get complicated, and complexity is what leads eventually – extremely recently, in cosmic terms – to humans. (And if you don’t think humans are complicated, you must have been hiding in a cave for all of 2020.)

Things had to get very complicated indeed to lead to humans, after forming what Christian calls “Goldilocks conditions.” You know, like the third of the Three Bears’ bowls of porridge – too hot, too cold and just right.

The nine stages from the Big Bang to us

That happened in nine huge steps, which Jim Kingsbury explains this way:

There are different views of what the future might be like, but the pace of increasing complexity will be governed by how quickly we control more of the energy around us – that of the whole planet, then a solar system, then a galaxy – if we’re still around, of course.

The lectures are fascinating, and they are kept lively by the video clips Jim shows of the author David Christian himself, and of a couple of fast-talking young brothers named Hank and John Green. You can watch all three sessions at these addresses:

Jim Kingsbury himself was born and raised on a dairy farm in central New York. He got his bachelor’s degree from a state university and his first master’s from Clarkson University. He got his second, in mathematics, from the University of Kentucky. After a career as an air traffic control system engineer, he moved to WCBR in 2014.

He’s just one of the thoughtful and informative resident speakers who make the Westminster Institute of Lifelong Learning lecture series so fascinating.