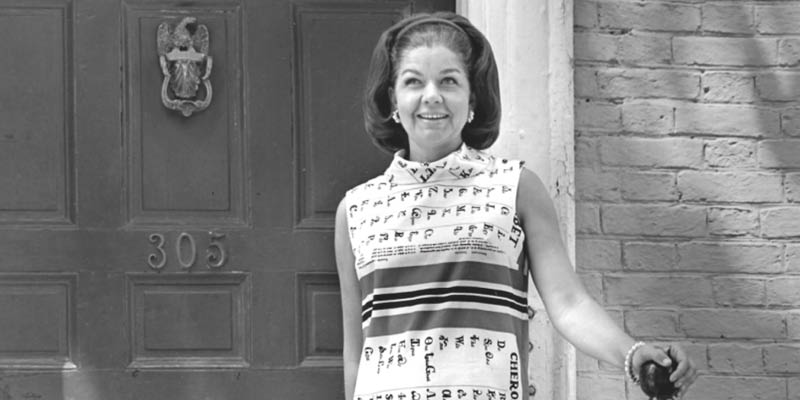 Frankie Welch was a home economics teacher when she and her family moved to Washington, D.C., in 1953. She continued to teach after she arrived, but soon, she saw a demand for high fashion. Frankie became a fashion designer to the powerful and elite.

She looked around at the members of Congress and their wives, the people leading Cabinet agencies and the embassies full of diplomats from around the world, and saw that this diverse population had something in common: “They wanted to make an impression and to fit in to Washington,” says her daughter Peggy. Frankie Welch helped them do just that. And she offered fashion to everyone at her retail store, Frankie Welch of Alexandria, Virginia. 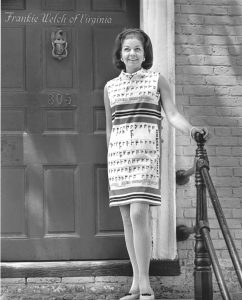 We are reminded of the role this Rome, Ga., native played in the fashions of recent decades by a new book from the University of Georgia Press with Georgia Humanities, Frankie Welch’s Americana, by Ashley Callahan. As the UGA Press website describes it:

“Featuring her scarf and fashion designs for the 1968 presidential campaigns, the history of her influential dress shop in Alexandria, Virginia, her connections to first ladies and other D.C. tastemakers, and her exuberant embrace of Americana during the U.S. Bicentennial, this history weaves Welch’s personal biography into the literal fabric of our country.”

It also tells us a great deal about a long-time resident and neighbor, because Frankie Welch moved to WCBR in 2001, and lived here until she passed away at the age of 97 in September, 2021.

Daughter Peggy said Frankie came to WCBR because she saw that her neighbors would be like the people she had known and worked with in Washington – creative, active people who were leaders in their chosen fields. She was attracted by the features of independent living she found here, but also because she knew she would be cared for when she needed it. Frankie experienced every level of care the community offered.

“She had an excellent experience,” remembers Peggy, who herself is a resident of Charlottesville. “She enjoyed the people, the other residents she met. And she thought the world of the staff.”

She liked interacting with all sorts of people, and she exemplified that in her career. Today, you can find her work at the Gerald R. Ford Presidential Library and the Smithsonian’s National Museum of American History, in the form of dresses she designed for First Lady Betty Ford. But spend a moment with Google’s image search, and you’ll find pictures of her with another client – Rosalynn Carter, whose husband Jimmy was also President, and before that governor of Frankie’s native state. She designed the Discover America scarf for Lady Bird Johnson for the first fashion show in the White House in 1968.

You’d find the same bipartisanship among the rest of her clients, says author Ashley Callahan. “Republicans and Democrats shopped side by side in her shop in Alexandria.” In 1968, she also designed a documentary fabric for the Republican National Convention, and a scarf for Hubert Humphrey’s campaign, featuring his HHH logo.

She was mainly known for the scarves she designed for many clients, including McDonald’s, Time-Life, Auburn University, West Point, the University of Virginia Alumni Association, Virginia Tech, the American Medical Association, the Congressional Wives’ Club, the Princeton Club, the United States Marine Corps, the United States Historical Society, St. Paul’s Cathedral in London, the Indianapolis 500, and the Watergate Hotel.

The book’s title states the case, because this was indeed Frankie’s America.