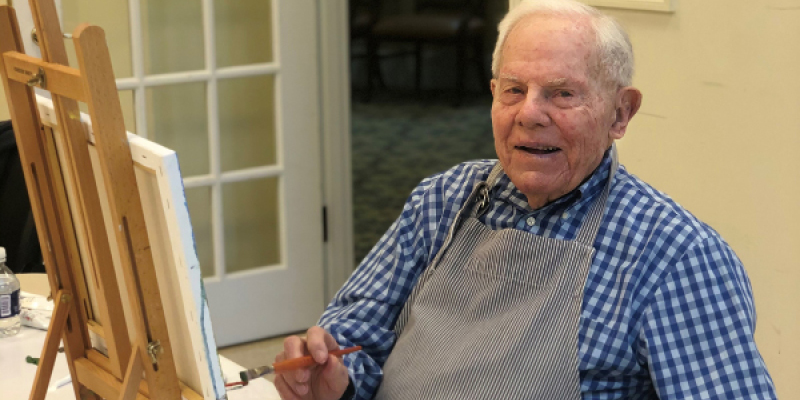 Guy Fiske has gotten a lot out of his oil painting classes at Westminster-Canterbury of the Blue Ridge. And now, he has made a generous donation to ensure that others will gain similar benefits from the program.

He and his wife, Jacqueline, moved into their beautiful Blue Ridge apartment in May of 2016. Sadly, Jacqueline passed away soon thereafter. In time, Guy took up oil painting. He had been painting already, with acrylics. But “I switched over because we have a great oil teacher, Marcia Mitchell,” he says.

As Guy’s skills grew, he was pleased to show some of his work along WCBR’s Gallery Walk.

Guy has been a faithful annual contributor to the WCBR Foundation, according to Bethanie Constant, the vice president of development at WCBR. When he learned that he could direct his generous contribution to the Life Enrichment Fund, and that it would cover many of the activities he and fellow residents enjoyed, it inspired an increased contribution.

He has enjoyed seeing the oil classes grow. When he arrived, the popular class was watercolors. He’s got nothing against that form of expression, but “I wasn’t very good at watercolors.” He found that once he had the right teacher, oil was the medium for him. Others have come to agree. Now there are 10 in the latest oils class, making it just as big as watercolors. More than that, he says, there are “four men in the class now.”

He’s done what he could to make the class grow: “I asked what it would cost to open it and they told me, and I put the money up.”

This fits with a familiar pattern for Guy Fiske. At 97, he can look back upon a lifetime of finding something valuable, and then playing a leading role in building it up successfully.

As an ensign in the Navy, he was a landing craft group commander, and landed troops under enemy fire in seven invasions in the Pacific, the last one being the battle of Okinawa. He was promoted to lieutenant commander at the age of 22. He might have become an admiral had he stayed in, but he went on to make his mark in an impressive variety of ways in the private sector.

He first spent 20 years with General Electric in a variety of leadership capacities, starting in sales and ending up over the information systems equipment division. He went from there to corporate vice president and group executive of the International Telephone and Telegraph Corp. Then he became chairman of Asbestos Corp., Ltd., and eventually was executive vice president and director of the General Dynamics Corp.

Along the way, he was involved in purchasing several companies and building them far beyond their original value. One he bought for $10 million, and the company sold it for twenty times that.

Then he turned back to the public sector, working for a guy named Ronald Reagan. He was undersecretary of Energy and became deputy secretary of Commerce in 1982.

Today, he puts that creative energy to work producing paintings of horses, elephants, and many other subjects at a prodigious rate – so many that “I don’t have any room in my apartment.”

And now, his contribution to the Life Enrichment Fund assures others will have opportunity to exercise their creativity as well.

The Life Enrichment Fund offers residents the chance to enhance their quality of life through cultural, educational, leisure and recreational programming. Gifts such as Guy’s may be used to support the offering of performances, lectures, classes, and instruction provided by local and regional professionals. Examples of supported activities and programs include the Jessup Memorial Library, live concerts, art classes, music and art therapy, computer classes, and other group activities and events.

“Coming out of the pandemic, I was thrilled to learn that an oil painting class was being offered because of a very generous donor,” said student artist Joan Kammire. “Unleashing one’s creativity, especially in a new and challenging area, is so healthy for mind and spirit. The guidance and support from our instructor and classmates were warm, encouraging and very much needed after a long period of limited contact with other residents. I am very grateful to WCBR and the muse who made this opportunity possible.”

Thanks to Guy’s gift, and gifts from other donors, these classes and art supplies are currently provided at no cost to students. If you are interested in supporting Life Enrichment, like Guy, contact Bethanie Constant at (434) 972-3281, Bethanie.Constant@wc-br.org, or stop by the Development Office at WCBR to learn more.