Resident Kathryn Parker stays involved on and off campus, indoors and out 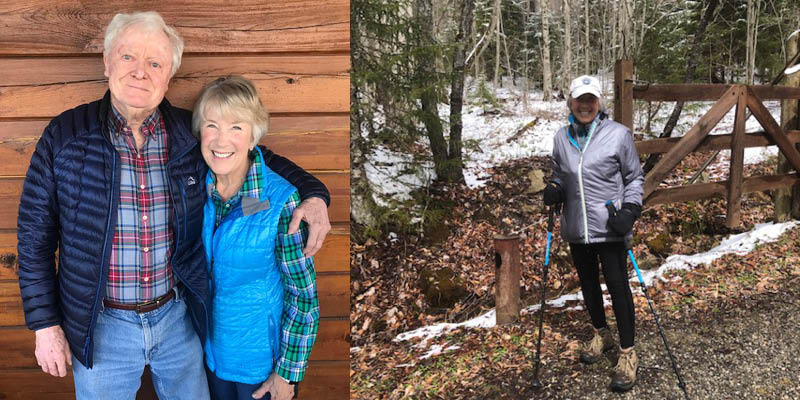 Kathryn Parker and her husband Troost were members of the Compass Club for 10 years before moving to WCBR.

Then, in 2019, they “pushed the Go button” and made the move into their cottage when it became clear it was time. “Having been on the Compass Club list made it possible for us to move fairly quickly “once we decided.”

“We just love it,” she says. She loves the sunshine coming in her cottage windows. More than that, she loves the outdoors. “I need to be able to get outside, and love to dig in the dirt.” Having a garden has a lot to do with her mental and physical well-being.

There’s a lot more they love. They had several friends in the WCBR community before they moved in – her husband, Troost, is originally from the Charlottesville area – and they looked forward to joining them. And the friends they had here already were just the beginning. “In the last three years, we’ve met many other intellectually stimulating, interesting and fun people here.” WCBR abounds with such neighbors.

Unlike her husband, Kathryn is not originally from this area. In fact, she’s from Canada – her father was in the Canadian Army. But she’s lived in and near Virginia since she was 14, because her father was stationed in Washington, D.C. So, she’s very much at home in Charlottesville – although she can miss northern Ontario.

Fortunately, she and Troost have a second home in the mountains of West Virginia. In many ways, the climate there resembles that of Ontario and Quebec, so Canadian family members feel at home when they visit her there. She loves going there for other reasons as well, such as fly-fishing, hiking, cross-country skiing, snowshoeing and biking.

But she knows that as the years pass there will be less of that, and fortunately WCBR affords her plenty of opportunities to be active. She’s overwhelmed by “the range of physical things you can do here, such as yoga, fitness classes, and water aerobics. The WCBR saltwater pool is wonderful and gentle on our aging skin!”

“I am playing pickle ball with WCBR friends,” and is surprised by how much she enjoys it. “I never thought I’d go back to playing racket sports” until she tried it. And playing bridge – participating in bridge lessons sponsored by WCBR – and attending WILL classes and other programs keep her life interesting and stimulating.

For his part, Troost – who is nine years older and has limited mobility now – works with a personal trainer. Fortunately, a therapist came to work with him in the cottage during the worst of the pandemic. “It’s just so different than living in the external community, where it’s so difficult to get people to come to your home for such services,” she says. “It’s just brilliant. I feel so grateful to be here.”

And she’s become part of an effort to make WCBR even better. With all of her energy, she has long been involved in the community around her. She has served on the Martha Jefferson Hospital board, currently belongs to the Albemarle Garden Club and The Contemporary Club of Albemarle, and is actively involved in promoting the budding Botanical Garden of the Piedmont.

Since coming here, “I’ve been invited to join and lead committees and am feeling my way toward more engagement in the Resident’s Association.” She’s found there are many ways to become active in the WCBR Community. In the meantime, “I am inclined to serve on time-limited projects.” She serves as one of two residents on the Inclusive Excellence Team, working to make the resident community more diverse. “We’ve just had the detailed plan approved,” she says, and she looks forward to helping “do what it takes to make this plan successful.”

“There’s so much to do here,” she says. “You can be doing something every day.” WCBR is a warm and welcoming place. “Troost and I are so fortunate to be here in such a supportive continuing care retirement community.”