The ever-changing beauty of the Gallery Walk art exhibits 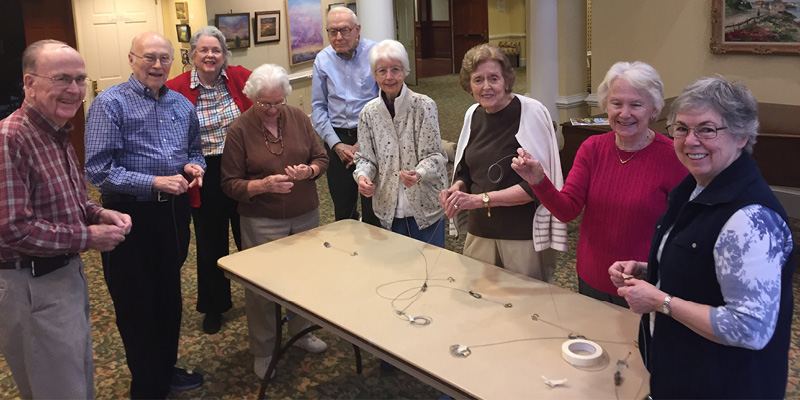 The Gallery Walk just inside the entrance of Westminster-Canterbury of the Blue Ridge is always a place of beauty. And the original artwork that adorns its walls is always changing:

All of this is scheduled and arranged by residents Rosemarie Koch, Susan Thomas, and their teammates on the Gallery Walk subcommittee. 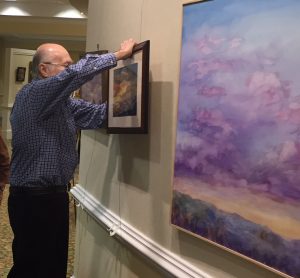 They love it. So do other WCBR residents, and associates as well. They get pretty excited about the exhibits.

“It’s hard to hang the gallery show” each month, says Susan. “You get the old one down at 9 a.m. Putting the new show up begins at 10 and takes about 2 hours. And people are already coming to see what’s new while the pictures are being hung.”

Susan has been handling the scheduling for the past five years, and she already has pretty much every month charted out through May 2022. It’s a lot of work, lining up dates for artists that don’t conflict with other things they have going on, but it’s no trouble finding local artists who want to take advantage of the opportunity.

The emphasis is on artists from this part of Virginia. Sometimes the exhibitors are from farther away, but “not often,” Susan says, “because there are so many local people who want to come.”

It’s not always easy putting these exhibits together. “For several months, the artists couldn’t come in the building” because of COVID, Susan recalls. “They would unload their works from the car” and others would take them in to the Gallery Walk. But they kept coming. “They still thought of it as a privilege.”

“They beg to be on the schedule.”

During the COVID restrictions, the job of changing the exhibits monthly has gotten done by a small team: “Just four of us.” But they know help is on the way, Susan says. “We have 10 or 12 people champing at the bit to get back to it.”

They take a lot of pride in what they’re doing. “It’s utterly fabulous,” she says. It’s not just some random pictures on the wall. “It is a professional gallery.”

This all started in 2006 under the leadership of the late resident Mary Wagner. The exhibition space was originally in the hall next to the Marketplace. In 2012 the exhibit moved to the present place between in the foyer just before the rotunda, equipped with the gallery lighting and new hanging system that add so much to that “professional gallery” experience.

In 2009 Nancy Bryant became the Gallery Walk chair. She retired in July 2019. She was succeeded by Rosemarie Koch. Susan started handling contacting and scheduling outside artists in 2017. 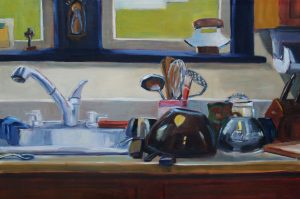 It’s a lot of work, and keeps her very busy, but Susan likes being busy – and, she notes, that’s something she has in common with so many of her fellow residents. And that, she says, is “the thing that makes this place the best.”

Now that April has arrived, it’s on to the engaging works of Judith Guy, a painter of the extraordinary qualities of ordinary things, which according to her website are “images of ordinary time, domestic moments, what I love about the things and people around me.”