WCBR Walkers step up to fund research to end Alzheimer’s

When Isabelle Halley des Fontaines moved into WCBR in 2014, she got involved in the fight to end Alzheimer’s. Her new Westminster-Canterbury of the Blue Ridge friend Sally Paschal was her inspiration to get increasingly involved in the event and the cause it is meant to help.

Now, she’s the WCBR Team Leader in the Alzheimer’s Association Walk to End Alzheimer’s®️, the world’s largest event to raise awareness and funds for Alzheimer’s care, support and research. This year, the event is coming up on Oct. 22.

Sally passed away this year, so Isabelle and many others carry on without her. But when Isabelle first participated in the event, Sally was the one who showed her how it’s done.

“Here I was in my early 70s, and this woman was in her mid 80s,” Isabelle remembers, “and she could walk faster than I could – with her walking stick.”

So she tried harder and got involved in more ways as time goes by. First, she used her computer skills to design a web page for residents, and recruit both walkers and donors.

“I am very computer-literate,” explains Isabelle. She obtained her master’s degree in technology management after moving to this country from her native Paris. Here, she also met her husband, Steve Goldstein, who she says “has done wonderful things himself.” You may have read about Steve on this blog before. He’s the one who delivered the fascinating WILL lecture on bacteriophages, the miraculous viruses that can save lives by eating dangerous bacteria.

Isabelle and Steve had initially retired, like many former federal workers, in the Northern Virginia suburbs outside Washington. But they decided in 2014 to move to Charlottesville because as they looked around and debated the options, WCBR was the one place they both really liked.

So they came here, and they both got involved. And Isabelle’s efforts to help those affected by Alzheimer’s are not limited to the walk. She also regularly volunteers in WCBR’s Memory Care unit. WCBR is proud to be the region’s only certified Hearthstone Institute I’m Still Here®️ Center of Excellence and one of only 40 nationwide. Isabelle and other residents actively support neighbors with memory issues and their caregivers, with an active working group, resident website resources, and neighborly assistance.

After eight years here, Isabelle now knows everyone receiving care in the memory unit. “We’ve seen around us so many people we care about, some brilliant people, struck by this disease.” And she feels she may make a difference. “They feel comfortable because they see me on a regular basis.”

The event has changed in the time Isabelle has participated. During COVID, folks participated here on campus – and while the in-person event has resumed, walking at home is still an option for those who prefer. 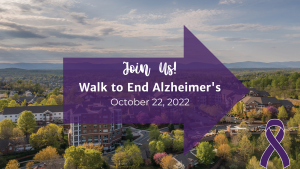