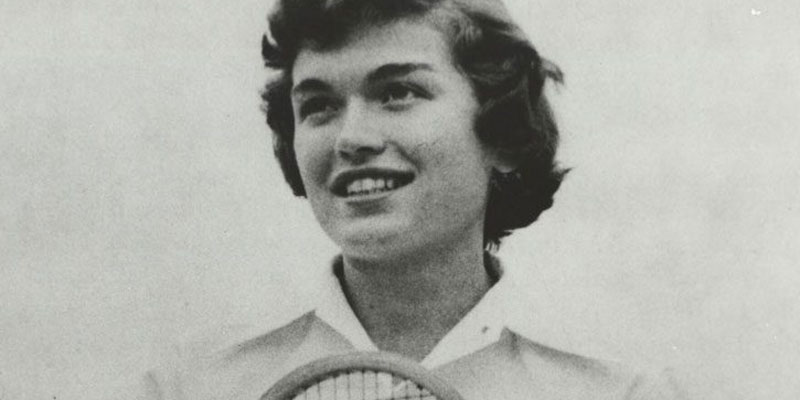 In the early 1950s, Mary Slaughter – a resident at Westminster-Canterbury of the Blue Ridge – made history, right here in Charlottesville.

She wasn’t really trying to. She was just trying to get better at tennis. Of course, she was already amazingly good.

She was the first woman to play a varsity sport at the University of Virginia, the first to win a letter. She did so as a member of the men’s tennis team. She was the number-four player on the team. She didn’t see this as remarkable. Neither did her teammates, because they knew how good she was – especially the No. 5 player, who kept trying to take her spot and failing.

It kind of shook up some of the opposing teams, though.

How did all this happen?

Way before her time

Well, first, it was remarkable that she was even there. UVA didn’t admit female students until 1970. But her father was a professor at the university, and she and several other daughters of faculty were allowed to attend classes. She had been born and raised in Charlottesville, so “I lived at home. It was just like high school,” she recently told a sportswriter.

Except that her high school didn’t have a girls’ tennis team. Neither did UVA, of course. But the Virginia team had a coach, Carl “Red” Rohmann, who knew her Dad. More importantly, he knew Mary – and how good she was.

Mary had never played on a team, but she had done well in the state women’s tournament at Farmington Country Club in Charlotteville in September 1952. She got to the quarterfinals, where she lost to the woman who ended up winning the whole thing. She set her sights on the national indoor tournament for juniors in Boston. Red Rohmann worked with her to help her get ready.

“He found out how good I was… or not,” she recalls modestly. There was no “or not” to it. She went to Boston, and she won that tournament.

“That was fun,” she says. “The more success one has, the more fun it is. And the more competitive you get.” Not that she was a shrinking violet before that: “I was always very, very competitive.”

Her first time on a team

So Rohmann put her on the team – never mind that the rest of the team was male. There was no rule against that – yet. (Two years later, there would be.)

In 1952-53, she played on the freshman team. Sometimes they would play against the varsity teams from local preps. Once, they played at Woodbury Forest, where her younger brother played as No. 2. The boy who would have to play Mary asked her brother whether he had a chance of beating her. Her brother said, “I don’t know whether you can beat her or not, but I never have.”

The next year she played varsity, becoming by far the first woman to win a letter at the university. Her letter sweater is on display at the Boar’s Head Sports Club.

Her goal all along was to get better for future competition against other women. “Those two years I played on the men’s tennis team were just crucial to my improvement.”

It was “the first time I’d ever played on a team,” she says, and “I really liked that.”

“The boys thought I was OK.” How could they help it, since as she matter-of-factly says, “I won a lot.”

He didn’t want his frat brothers to see

One way she won was as a doubles partner with Charlie Jones, the No. 5 singles player. They got along together well and made a good doubles team. But Charlie kept wanting to move up to No. 4 in singles, and he kept challenging Mary. One time, he asked him to let him play her for the spot, only off-campus. She asked why. He said he couldn’t bear to do it where his fraternity brothers could see. “He was so distressed about them seeing him losing.”

After that year, the ACC changed the rules, and she wasn’t allowed to play with the boys anymore. So she transferred to UNC Greensboro, which was then known as Woman’s College of the University of North Carolina. She graduated in 1956 with a degree in physical education.

She taught P.E. at Mount Holyoke College in Massachusetts. After going to graduate school for a master’s and a doctorate, she became a professor at the University of Illinois, where stayed until retiring and returning to live in Charlottesville.

Over the years, she kept playing tennis. Competitively. She won Virginia state women’s singles titles in 1959, 1961 and 1963. In 1965, she won Illinois state championships in singles and doubles.

She “coached” women’s tennis at Illinois. At least most would call it that. But “I hate to use the word ‘coach,’ because women didn’t have any teams” until 1975. Basically, it was a tennis club that traveled around the state. It was informal, and not all the players took it seriously. “All of a sudden they got a date, they weren’t going.”

Now, Mary has been getting more attention than she did all those years ago, especially with this being the 50th anniversary of UVA going coed.

“They were going to have a huge event – Katie Couric, people like that,” she says. “I was excited about it.” But the coronavirus got in the way, so the celebration was downsized, and moved to the Web. “The Zoom life,” says Mary.

But people remember – especially those who were there. One UVA alumnus left a comment on an article about Mary’s time at the school in University of Virginia Magazine:

“Mary Slaughter was in one of my classes at UVA and not knowing about her playing tennis, I asked her if she would like to play. On the tennis court I returned very few of her serves. She ran me all over the court. I talked to her father, Coach Slaughter a few days later and told him I had played tennis with her. He said ‘I bet you didn’t win.’”

He knew his daughter well.

Recently, Mary spoke about her tennis career to her fellow WCBR residents as part of the Westminster Institute of Lifelong Learning lecture series. You can see and hear her speech online at this address: https://vimeo.com/463008827.