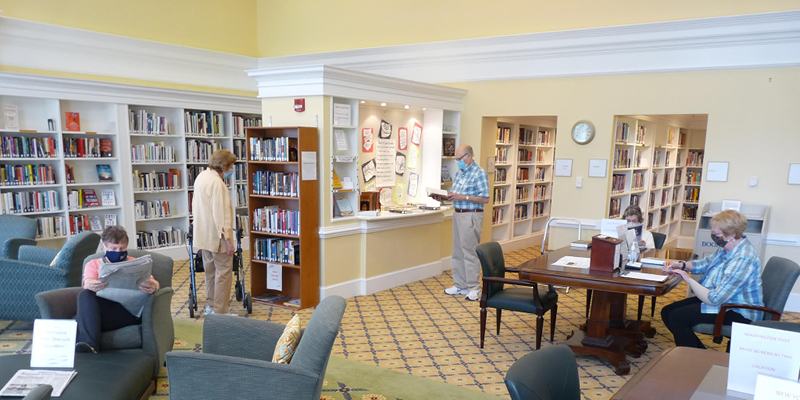 The written word means a lot to the WCBR community. You can tell that by a lot of things, including the fact that our Book Group had to be expanded into two groups to meet the demand.

Of course, quite a few residents have written books. As resident Joy Perry notes, “We have more Ph.D.s than we have cats and dogs.” An even larger number really love to read them, which is a reason why Joy and nearly 50 other residents volunteer to operate WCBR’s Jessup Memorial Library.

It’s an impressive place. Originally designed to be a dining room, it’s unusually spacious and comfortable, not just a little room tucked away in a corner. Residents who have lived in other senior communities can tell you that at those places, the “library” is sometimes little more than a few shelves on the walls of the hallways. Here, it’s a serious, welcoming facility.

And it’s an all-volunteer operation, run by residents not only for themselves, but for the use of associates as well. One of the residents who make it all happen is Bill O’Neil, vice chairman of the library committee. He recently shared some numbers:

The fact that residents run it as a labor of love and do it well is further proof of how much books mean here. The library ”runs like a well-oiled machine,” says Joy Perry.

Books – including donated paperbacks that are lent out on an honor system – aren’t the only content at the library. Five different newspapers the library subscribes to are always available, as well as magazines – mostly donated. There’s also a large DVD collection and music CDs, also donated.

The library is run on modern lines – with a digital database that residents can consult to check from home to see what’s in and what’s checked out.

“I love books and the people who work on the books at the library,” says Bill O’Neil.

So do many others. You may have read that one recent new resident, Isaac Winograd, cited the library as a big reason he decided to move here from another retirement community – one that was much larger than WCBR, but only had about one-fifth the library.

The volunteers who run it regularly hear such things. Joy Perry says folks take a look at Jessup Memorial, and decide, “If this community has a library like this, I want to be a part of it.”