Woodworking shop is a big draw for many residents 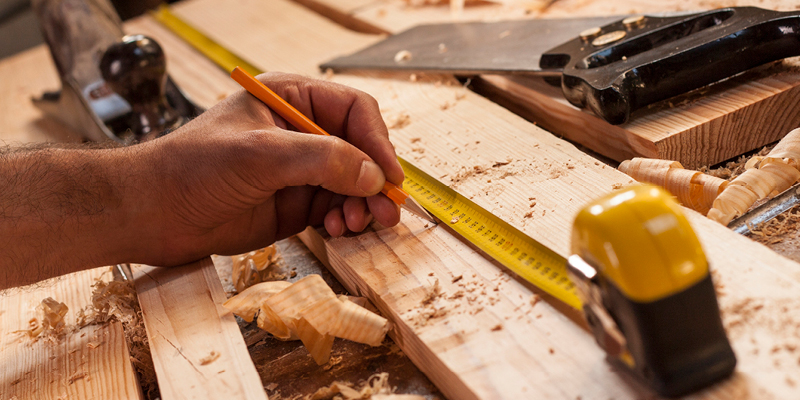 Mitch Sams plunged into serious woodworking decades ago. And that is a big reason why he lives at WCBR.

“In 1980, we moved to a home that had a basement large enough to develop a workshop,” he recalls. He did so, and really got into the hobby, building some impressive things. For instance, he and his wife had wanted to buy a secretary desk – a desk with the writing surface that flips down, with a bookcase on top.

“But we couldn’t afford it,” he says. So, he built one. It was elaborate, with “a lot of fancy carving.”

“I made a lot of mistakes,” he says, but that was how he learned. Over the years, he built a stereo cabinet and Early American tables with “a lot of inlay.”

So, when it came time to retire, he was looking for a place where he didn’t have to give up his avocation. Then he saw the woodworking shop at WCBR.

“I would not have moved here if they had not had that,” he says. “That was my passion then.”

Charlie Stamm got involved in the craft as a child. “My family always had little workshops,” he says. Then, when he went into the Army, “They had wonderful facilities.” When he got out of the military, he continued to pursue woodworking “wherever I was.”

And when he came to WCBR four years ago, that was a big consideration. He wanted to know: “Can I bring my equipment?” The answer was a big “yes.” And since then, he’s noticed that “Over time, as residents come and ask the same questions I did, they’re shown the shop.”

The arrangement at the shop is “extremely informal,” he explains. It is “operated by residents and maintained by residents.” And the 10 or 12 regulars have a very relaxed way of working together to operate the shop: “No program, no meetings, no minutes taken, no records kept,” says Charlie.

Later, he elaborates on that theme: “No rules, no penalties, no prizes.”

But it is nowhere close to anarchy. There is a sign-in sheet, and Mitch says everyone is careful that all who use the shop “have to be experienced,” for safety’s sake.

As for a resident’s own equipment, “If what you have is better than what we have, we’ll throw out what we have and use that.” The old equipment is given away, often to Habitat for Humanity. And everyone uses it, share and share alike. “It’s not equipment that has people’s names on it; we all use it,” says Charlie.

Mitch credits Charlie for contributing some of the best stuff: “Charlie Stamm gave the most recent band saws and table saws. Better than mine.”

And the replaced equipment isn’t all that is given away. The woodworkers contribute items for sale in the WCBR gift shop – “Kleenex holders, reindeer for Christmas, bookstands” and such, as Mitch describes things he has contributed. Proceeds from the sales go to the WCBR Foundation.

And when practical, the workshop folks will repair their fellow residents’ furniture – again, on a volunteer basis.

Mitch says he doesn’t do as much woodworking as he used to. He stays busy with a lot of other things, such as giving Westminster Institute of Lifelong Learning lectures. (In fact, he is one of the two residents who started that program.) But he’s glad the shop is here. Otherwise, he wouldn’t be here, either.